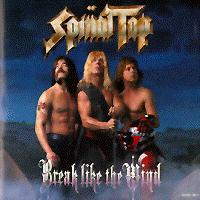 Break Like the Wind (Dead Faith/MCA, 1992): The band’s 17th album, released on March 17, 1992. It eventually reached the 61st spot on the Billboard charts. The boys told Arsenio Hall soon after that they considered the title of the album "sort of ironic." David added that the album "is part of a new maturity we find ourselves trapped in." The album was inspired by the supposed death of despised former manager Ian Faith, hence the label name tribute. Prompted a six-week, 21-city tour of the United States and England that began on May 17, 1992, at an Air Force base in Colorado Springs, Colorado, and culminated in a sell-out on July 7 at London’s famed Royal Albert Hall. Also inspired two music videos ("Bitch School" and "The Majesty of Rock"), a television special and a concert film. "Break Like the Wind" was originally conceived as a three-album work, reminiscent of "Jap Habit," to be sold 20 minutes apart a la Guns ’N Roses "Use Your Illusion I" and "II." (SP) However, the masters for the second and third albums disappeared under suspicious circumstances. (IST) It eventually topped at No. 61 on the Billboard chart, and more than any of their releases has been dissected and digested in the press and by fans. Rated A by Entertainment Weekly and given three of five stars by Rolling Stone, although there were questions about whether Tap had sold-out because of the many cameos on the album by talented musicians such as Cher and Jeff Beck. The album includes new but familiar tunes such as "Bitch School" (which has been compared to Specimen’s "The Beauty of Poison" and features Jeff Beck, Slash and Joe Satriani) and "Cash on Delivery" (with Derek on vocals and David starting out with what Nigel calls a "fat woman tone"), classics such as "The Sun Never Sweats," Nigel’s "Clam Caravan" "All the Way Home" (the 1961 demo, remixed into fake stereo) and "Rainy Day Sun," and protest songs such as "Stinking Up the Great Outdoors" and "Now Leaving on Track 13" (euthanasia)—a genre the band had at one time vowed never to write. Nigel: "What we’re saying with this album is ‘We’re back. Join us, won’t you, in a consumer sense.’ " (RS) Nigel also offers this: "To me, the whole record is like those little dolls that you take apart, and there’s a little doll in it, and you take it apart, and there’s another little doll. And the mystery of course, is if you could take the smallest doll apart, what would be inside it? Would there be another big one? That’s really ‘Break Like the Wind’ in a metaphor masked as a parable posing as an allegory." (NYT) See also All the Way Home; A Spinal Tap Reunion; Back in the Saddle Again; Bitch School; Burnett, T-Bone; Cher; Christmas with the Devil; Clam Caravan; Colander; Eight-Track; Extra-Long Box; Lukather, Steve; Seattle; Solos.

Purchase this album through the Tap Store